Fertigation in its simplistic form is the addition of water-soluble micro and macro nutrients to irrigation water.  The roots of this application started in the agriculture industry through flood and furrow applications of which are still practiced to this day.

The agriculture industry began to evolve fertigation in the late 20th century into practical irrigation applications that utilize mechanical irrigation delivery systems.  With the backbone of an irrigation system in place, the means to inject fertilizer and mitigate its rate is what has changed significantly from inception.

Today, modern agricultural fertigation utilizes GIS(Geographic Information Systems)  to track the application of fertilizers through an entirely automated system.  The application rates within a single field can be programmed to meet the needs of specific soil types paired with the current season’s crops.

As all great irrigation technologies have their roots in agriculture, it did not take long to integrate fertigation into ornamental horticulture.  It was heavily promoted in golf coarse irrigation as a means to avoid stripping(uneven application of fertilizer causing inconsistent growth and coloration) as well as a means to reduce waste(material, manpower, equipment)

After researching the technology, it was clear that the designs were becoming more practical and cost effective.  What once was a complex system designed for technical minds has evolved into a simple system that can be managed without the consulting a mechanical engineer.

I did not begin to understand just how far the technology has evolved until I had the privilege of working on City Center in Las Vegas, Nevada.  This multi-billion dollar development had installed a fertilized irrigation line that ran through the entire 52 acre resort.  This advanced fertigation design was monitored by a central control system that could be adjusted via remote from anywhere on the property.  Sensors were placed throughout the system to evaluate the system’s ability to delivery consistent ratios across dozens of separate installations.

After talking to Darryl Green, an industry leader in fertigation systems and the founder of Landscape Injection Systems, it was clear that I had missed the mark on just what a fertigation system was capable of injecting into irrigation water.  It turns out that it should not be called fertigation because there are a lot more applications than just fertilizer.  Naturally I assumed chemical liquid or water soluble fertilizers were the intent of fertigation systems.  What really threw me for a loop were the other additives such as bio-stimulants, soil conditioners, surfactants and pest control.  At this point, it appears that you are eliminating much more than granular fertilizer applications.  With a properly managed irrigation injection system, you are eliminating the majority of manual applications related to plant health.

The next shocker that really sparked my interest was that injector systems could be 100% organic given the many liquid and soluble organic substitutes that were on the market.  I have a close friend that works for one of the worlds largest growers of carrots, Grimmway Farms.  He told me that they have fully automated organic fertilizer, herbicide, pesticide and other organic nutrients to their organic line.  Now they are the worlds largest grower of certified organic carrots, all with the use of injected irrigation systems.

This discussion will continue but understanding the backbone and full spectrum of this technology is just the start.  Please stay tuned for more in depth information.

Ben Green is our walking encyclopedia for irrigation systems, technology and materials. From basic to complex, Ben has installed irrigation systems of all types for a variety of properties. For almost 10 years now, Ben has developed from a ValleyCrest intern to become our go-to project manager for large complex landscape installations. Ben’s interest lies in the science and technology behind the tools and systems that enable best water management practices. 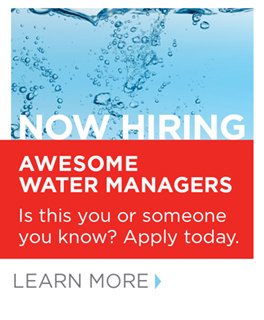 Back to top
© 2016 ValleyCrest Landscape Companies

As you can see, we care a lot about water management here at ValleyCrest. And we appreciate that you care too. If you'd like to subscribe to receive our latest water saving tips and best practices, provide your email address and click Subscribe.

We'd love to hear what you have to say!

We encourage you to share your thoughts by commenting
on our blog.